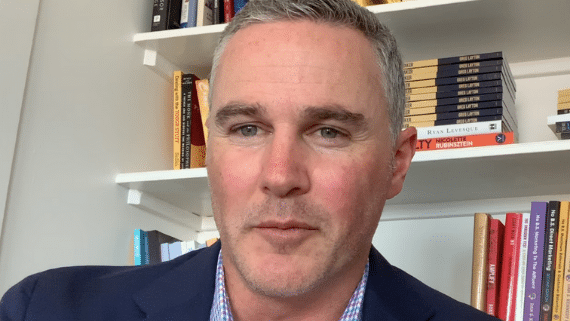 I've received an email from a listener, Damian, who's got a very tricky problem: a colleague named Wayne Kerr who is very difficult to deal with.

“Mate, the guy is Teflon. He's useless, but he has power. He takes credit for other's work, talks the talk, but won't walk the walk. He's really nice to your face but will bag you behind your back, or source info from you, to use or bag others. They manage to never make decisions and yet have the authority to do so. Anyway, they're basically a psycho-sociopathic chameleon, all about presenting their own best possible image to those with the power to promote, while everyone else is either competition or a utility.”

Well, this Mr. Kerr looks like a really challenging individual. Let's be honest, in our careers, we've all at some point had the opportunity to come across a bit of a character like this. But wouldn't it be nice to really understand how to deal with them? So I'm going to just lay out a few things for you about how I think the best ways are to respond to people like Wayne Kerr.

First and foremost, we've got to understand the real reasons behind their behaviour. What's actually going on here? Well, if someone is being described as a “sociopathic chameleon” there's a reason for that, and it's likely that there is some insecurity going on. Chances are that they're not that comfortable in their own skin in that job; it might be something from their history, it might be their capability, the level of pressure they're under. It might just be the way that they've operated their whole career and found it to be pretty effective. If they've been able to shapeshift their whole career, and actually get results, they're just going to keep repeating that behaviour. In fact, it's being reinforced as effective by the business or people that have promoted them previously.

We can, in business, be incredibly good at tolerating low performance and bad behaviour. And, in this case, it's not really about tolerating.

When someone's behaving like this, and others are letting them get away with it, you are fully endorsing it! So if their boss is not holding them to account, not giving them feedback that their behaviour isn't working or isn't effective or isn't very collegiate, then that behaviour is being endorsed.

The outer chief is a reflection of the inner chief

And then you factor in leadership and power. Ultimately, power makes you more of what you already are. It's the same with money; if you're generous, chances are you'll be fairly generous if you have more money. So if you've got an individual that's coming from a place of fear and insecurity, and you give them more power, what will play out in their mind is, “I need to be more loved, I need to create this sense of power so that I'm not having this fear.” And then they put up all sorts of weird behaviours in the real world like keeping people off balance, saying inappropriate things, being really aggressive behind closed doors but in public they're just the nicest person you've ever met. This all makes it really hard for you to connect with them or give them feedback.

Are they in your critical path?

What I've done previously is to take control of the dynamic in the relationship by planning some very specific actions that will lead to a response from the individual that is different to anything you've seen before. The key here in all these sorts of social experiments is never to do anything you've ever done before. If you speak to them in a certain way, you can't do that anymore. You've got to change the pattern of the relationship.

So keep yourself pure in spirit and intention. You could throw them under the bus, but, to be honest, it doesn't look good for you and it doesn't look good for them, and it's pretty unbecoming of a chief. We want to be the very best version of ourselves as we approach these Wayne Kerr types so do not make their life a misery. They will find a way to recover and get you back.

Open the door on vulnerability and trust

The first step is to support them, as best you can, and earn their trust. Now, how do you do that? Behind closed doors. Share some of your own vulnerability, what's hard for you, what you find difficult etc. Because what you're trying to do is open the door to them sharing some of their challenges, what they're battling with, and work out why they might be behaving in a particular way.

You can ask questions like, “Hey that project you're running, how is that going? Could I help you with that? I've found those projects really hard.” Or you could make a comment such as, “I can see you're battling with Joanne over in Marketing or Bob over in Supply Chain.” Maybe there's something there that you can do to open a conversation, to help them deal with some of their internal challenges. Be a real good friend to them and just see what happens.

What I've found is a lot of these people talk like Tarzan but they walk like Jane. They're not really that tough and not that hard. When you actually seek to understand them and maybe put on a bit of a stronger facade yourself, they tend to crumble.

If you get a good positive response, you might be in a situation to work with them behind closed doors to improve their reputation. The deeper trust you can get, the more you will have the ability to say to Wayne Kerr, “You know what, when you did that thing, I don't think that Raylene over there really understood what you were saying. Maybe you've got to go and rescue that situation.”

Once you’ve done the first step of getting some vulnerability out of them, the next step is some feedback-sharing sessions where each of you lines up opposite each other and gives some feedback to each other.

But before you launch into this, one of the keys to feedback is deep levels of trust. The more trust you have, the more willing people will be to hear your feedback on them. If the trust isn’t there, generally, they don't hear your feedback. They just block it and say, “That's a good opinion you've got mate, but that doesn't really apply to me, it's not really true, you don't get me.” So it’s critical that you show that you understand what's going on and what they're trying to achieve.

The next stage of this is to go to some level of more formal quality feedback, where there’s some dissonance and something where they stop and think, “Hey, things aren't right here.” So if in that feedback process above there is some evidence to give them some detail about how their personal brand and reputation is not as good as they think it is, or perhaps other people don't have the best opinion of them, then that can be really powerful for individuals to stop them in their tracks. But if you do that, remember, it’s vital that you keep the spirit true; that you're there to help them be the best version of themselves, that you really want the best for them. If you can maintain that real growth mindset that they can change, then it'll land.

Gloves off, but with respect

Finally, if this person is in your critical path and they are dominant and they are really owning an office and it's costing the organisation results, it's costing everybody happiness, it's an anchor chain on the business, then that is when I would go for some sort of public challenge, potentially in a really important team meeting. But remember, do this with rapport and respect.

Use some detailed evidence, be brave and respectfully challenge them. Show that their particular angle or the strategy they're pushing or their results are simply not working and why and how. You would need to be very well-prepared for this, and steel yourself because there would probably be a pretty solid response as they go on the defensive.

But, open debate, with the right spirit, is absolutely okay in business. In fact, I would fully promote doing that as a team. However, I repeat; you’ve got to get the trust right first. Those conversations can be difficult as there are a lot of factors involved, particularly politics. But if it's costing the business and costing the team, then you need to do something pretty solid at some point.

It can actually be about helping Wayne Kerr

Hopefully, you can get a bit of traction with this method and actually help the Wayne Kerrs of this world, because, remember they're the ones that are probably battling even more than you on the inside. You know what, they don't get to go home and feel great about themselves. So let's give them a little bit of a helping hand.

And Chief, just make sure that you're not doing any of this behaviour. If you're feeling insecure and maybe doing some shapeshifting at work, just have a really deep think about what your reputation might be, because we all want you to be successful.